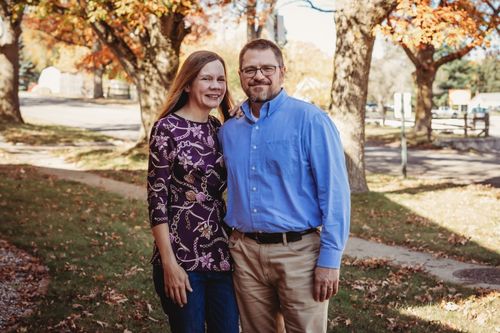 “Go from your country and your kindred and your father’s house to the land that I will show you.”  (Genesis 12:1).

Never could have Jeff and April Brown imagined how strongly those words would resonate in their hearts, not just once in their lifetimes, but twice.  The first being a little more than twelve years ago, December 2004, the month they moved to Michigan.

Born and raised in the small town of Pine Grove, Pennsylvania, surrounded by the beauty of the Appalachian mountains, coal mines, farmland, and family all around, they never pictured themselves moving.  Married almost ten years with two small girls, they were comfortable where they were.  But God had different plans, plans that went far beyond Jeff’s engineering and administrative experience, far beyond April’s biology degree and future years of teaching, plans that only He knew and was preparing to reveal to them for such a time as this.

Those plans brought them to Bad Axe, Michigan, in the heart of Michigan’s thumb, in the heart of sugar beet and dairy farms.  This was the land the Lord had brought them to, a land away from everything and everyone they had ever known.  A land where the Lord drew them near, calling them to ministry in 2011.  The Brown’s pursued God’s call on their lives to full time ministry the next couple of years, as Jeff continued with his secular job and their daughters finished up school.  During this time both Jeff and April served their home church body at Evangel Life Assembly of God, rotating amongst worship, kids, men’s and women’s, discipleship, and outreach ministries.

Then August 2015 rolled along, and Jeff and April once again found the Lord commanding them to “go to the land He showed them”, and that land was not Bad Axe, MI.  Never in a million years did they have any intentions of visiting the World Missions booth; that was the furthest thing from where they believed the Lord was leading them.  Yet that was exactly where they found themselves after hearing the Lord’s call to serve overseas in Moldova, a country in eastern Europe.  From the fall of 2018 through the winter of 2020, the Brown’s served as missionaries with the Assemblies of God World Missions in Moldova’s capital of Chisinau, ministering the students and young people there.  But their time in Moldova was cut short in March 2020, when Covid 19 came on the scene shutting down much of the world.  In a matter of six hours the Brown’s found themselves on a plane headed home, as borders began closing behind them.

After three months with their daughter and son-in-law, during Michigan’s shutdown, Jeff and April found the Lord numbering and ordering their steps right here to Harrison, Michigan.  From their first time to Harrison, it felt like home…..family.  It was on June 1, 2020 that they were unanimously voted in as the lead pastors here at Trinity Christian Life center.  Their hearts are to love and serve the people around them, whether within the TCLC family or in our local community.  Because in God’s eyes we are all family, and He wants each and every one of us to THRIVE.  They look forward to all the Lord has in the coming years for Trinity Christian Life Center and the entire Harrison community.